Over the past eleven weeks, the international community has watched with alarm the escalation of violence by the Hong Kong police force against a diverse swath of Hong Kong people engaged in peaceful demonstrations against an extradition bill introduced by Carrie Lam, the Chief Executive of the Hong Kong SAR government. Instead of addressing the initial fundamental demands of the demonstrators—full withdrawal of the bill, withdrawal of the “riot” characterization of  the June 12 protest, unconditional release of all arrested protesters, independent commission of inquiry into police conduct, and universal suffrage—the Chief Executive continues to exhibit a shocking degree of incompetence, arrogance, and lack of political leadership.

“Instead of addressing the rampant violence deployed by a police force clearly ill-trained to deal appropriately with crowd control, the Chief Executive, echoing Beijing’s hard line, has focused on only the actions of those demonstrators engaged in more radical violent expression,” said Sharon Hom, Executive Director of Human Rights in China. “By completely ignoring the serious physical and mental harm inflicted on the Hong Kong people, including the vast majority of peaceful demonstrators, medical workers, journalists, bystanders, and local residents, and instead prioritizing narrow economic concerns, she has shown herself not fit to lead Hong Kong out of this political crisis.”

Videos shot over the past weekend show Hong Kong police officers committing violent acts including the following: firing rubber bullets into the backs of fleeing protesters at close range; beating and pushing a crowd of protesters down an escalator inside a metro station; smashing a young man’s head against the ground, knocking his front teeth out, as he pleads for mercy in a pool of blood; firing beanbag rounds straight into the right eye of an off-duty nurse, blinding her in that eye; and infiltrating protests (the police themselves have admitted to conducting “decoy operations”) and inciting violence. One video shot from a high angle shows a man getting a group of men in white t-shirts ready to go out to “do the job of the police” per his “arrangement with police.” (See compilation video.)

While Carrie Lam continues to aggressively defend the Hong Kong police and calls them “the pillar of the rule of law in Hong Kong,” a welcome statement by the Office of the UN High Commissioner for Human Rights, Michelle Bachelet, highlights the international obligations of the Hong Kong SAR and the Chinese central governments. Significantly, the statement referenced the “credible evidence” reviewed by the Office:  “officials can be seen firing tear gas canisters into crowded, enclosed areas and directly at individual protesters on multiple occasions, creating a considerable risk of death or serious injury.” Emphasizing that the fundamental rights of freedom of expression and peaceful assembly and the right to participate in public affairs are recognized in the International Covenant on Civil and Political Rights (ICCPR) “which is incorporated in the Basic Law of the Hong Kong SAR,” the Office urges the Hong Kong SAR authorities to do two things:

“The international standards for lawful use of force provide the most effective path for moving Hong Kong peacefully forward,” said Hom. “What we are witnessing in Hong Kong is a people painfully practicing democracy-building in the shadow of an authoritarian regime.”

The international community must reject Beijing’s politicized invocations—once again—of the “evils” of “splittism” and “terrorism,” and push back against its predictable accusations of “black hands” fomenting a “color revolution,” aided by “hostile foreign forces.”  The official state media outlets now blasting propaganda to rile up nationalist support on the mainland, and threatening Hong Kong people with images of lines of tanks rolling towards Shenzhen border for “drills” are merely the impoverished tactics of a regime bent on total social control. 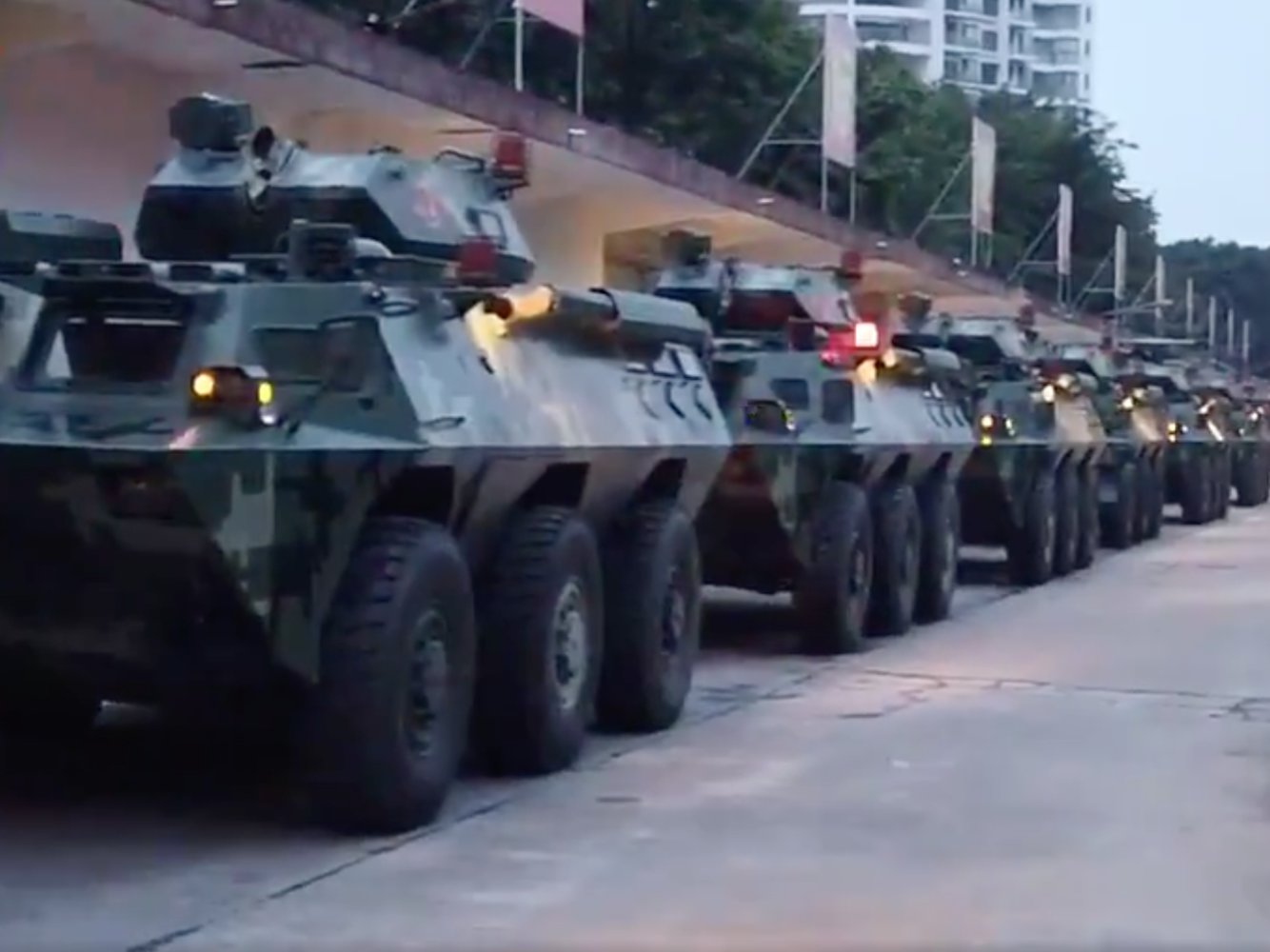 Dozens of military vehicles gathered across from Hong Kong in the Chinese city of Shenzhen on Monday as China mulled over its next move in response to escalating Hong Kong protests. Screenshot/Global Times/Twitter