[Black Jails]Four Shanghainese petitioners were intercepted by authorities on July 20, 2012 as they attempted to go to Beidaihe District, Hebei Province for a weekend trip. The four were detained and forcibly returned to Shanghai. Li Yufang (李玉芳) writes of two of the petitioners' experiences upon returning—she was locked in a black jail, and Wang Kouma (王扣玛) was questioned by the police, became ill and had to be rushed to the hospital, and as of July 31, 2012 was under 24-hour surveillance in his home.

On July 20, 2012, four of us Shanghainese rights defenders—Wang Kouma (王扣玛), myself, and two others—left for Beidaihe to escape the heat. The 21st and 22nd were the weekend, and the local Bureau of Letters and Calls would be closed. It happened that Beijing’s temperature had just reached 36 degrees Celsius, so we wanted to spend two days in Beidaihe and resume petitioning Monday. [Beidaihe is a beach resort district of Qinhuangdao, Hebei Province, where many officials hold meetings because of its proximity to Beijing.] Along our way, however, we were intercepted by local police, searched, taken back to Shanghai, and locked up. Even during the latest round of the China-U.S. Human Rights Dialogue, the authorities still created an ugly incident to trample on human rights.

On July 20 (Friday), we ran into several fellow petitioners from Shanghai on the train to Beijing, so we continued our journey together. For the past two years, the Beijing police have warned all hotels and guesthouses to not take in any Shanghainese petitioners, and that violators would be severely punished. (Citizens do not actually have the right to stay in hotels on their own soil? Surely there is no other country in the world that would do this. Or is it that we are all wanted criminals?) You can imagine how difficult life is for Shanghainese petitioners in Beijing. As it was the weekend, the Bureau of Letters and Calls would not be open for two days, and the weather in Beijing was blisteringly hot, so we thought we would go to Beidaihe for two days before returning to Beijing. We arrived that evening in Beidaihe at 11:23 p.m. While entering the checkpoint for visitors, we had to present our IDs for some reason and go through an x-ray scan. What was even more surprising was that the computer then displayed a long list of blacklisted Shanghai residents. All of the police at the checkpoint immediately tensed up, ordered us to take our bags and get off the train, and then took pictures of all of our belongings, one by one.

We were then immediately handed over to the Beidaihe District Office for Urging Petitioners to Turn Back and taken into custody. At 3:00 p.m. the following day (July 21), we were picked up by officials from the Shanghai municipal office in Beijing. At noon on July 22, we were again handed over to the Shanghai Yangpu District task force, which took us back to Shanghai. Upon arriving in Shanghai, Director Wu Yunhai (吴云海) of the Daqiao local office of letters and calls and people’s police officers from the Daqiao police substation took us to a black jail near Gongqing Forest Park on Jungong Road [in Yangpu District]. We were illegally detained there until 4:00 p.m. on July 27. For seven whole days, I was just like an escaped criminal who’d been captured, held by the Hebei, Beijing, and Shanghai police, and in the end taken to and locked up in a black jail near Gongqing Forest Park. But the nightmare did not end there: The Gongqing Forest Park black jail was hell on earth!

No one had stayed there for years. It was dark and damp. The grass was thick around the house and there was a foul smell of dead mussels everywhere. There were leeches in the toilet and centipedes in the shower, and they would crawl out from the sewer drain. The room was full of mosquitoes and some other kind of fly. The entire room, including the bed quilt, was filled with the intense, nauseating smell of mildew. Outside, stray dogs and cats ran about like crazy. . . . How could this be any place for humans? Even criminals should have a minimum livable environment. The authorities just don’t treat us like human beings. You [authorities] strip away our liberties arbitrarily and treat us like pigs and dogs—do you have even a shred of humanity?

I protested this. I asked that they move me somewhere else to improve the conditions of detention. They ignored me. During the three days in the Gongqing Forest Park black jail, I felt unwell, I had an itchy throat and cough, and I was weak and dizzy from being held for a long time in a room with poor air and from inhaling a lot of mildew. Praying for the wicked to find kindness in their hearts was unrealistic—I could only depend on fighting for my rights. On the morning of July 27, I could no longer tolerate such inhumane abuse. I tried using death as a protest. I cut my veins, banged my head against the wall, and screamed out. I hit my head until it was covered in bruises. When the guards found out, they put a stop to it and placed me under a strict watch. To stop their persecution, I opted to go on a hunger strike. Forced to act by my attempt to kill myself, the totally inhumane guards finally let me leave at 4 p.m. I was weak and ached all over when I got home, yet I was pleased for I understood a truth: One cannot rely on prayers and handouts to achieve liberty and rights. One must persevere and take a stand.

Wang Kouma, who took the trip to Beidaihe with me, had it even worse than me. His home had been unlawfully demolished, and his mother was persecuted to death in a black jail. By going to Beijing to seek redress for his mother’s unjust death, he courted imprisonment, and was sentenced to a year and a half. Wang was persecuted and critically ill in jail. Twice he was issued “in critical condition” notices and, he became disabled before his release from detention. This time he was taken on the no. 1462 train (Beijing-Shanghai) escorted by a number of police in the morning of July 22, 2012; he arrived in Shanghai in the morning of July 23. Police from Changning District took him from Fucun Road to the Jiangsu Road police substation and immediately began interrogating him. By 2 p.m., he felt unwell, so the police sent five officers to take him to the detention center. Wang Kouma fell into a semi-stupor during the journey, so they decided to rush him to Changning Center Hospital for treatment (with the police’s support). His situation was perilous through, with his blood pressure hovering around 220-225. Finally, he was released to go home at 11 p.m. He is currently in his home under round-the-clock police surveillance.

The 17th China-U.S. Human Rights Dialogue took place July 23-24. U.S. Assistant Secretary of State for Democracy, Human Rights and Labor Michael Posner criticized that the overall human rights situation in China continues to deteriorate. However, Chinese Ministry of Foreign Affairs Spokesman Hong Lei (洪磊) said, “No country in the world has perfect human rights conditions. The Chinese people are the best qualified to speak about China's human rights conditions.” Might I ask, then, if Chinese people cannot go about their own country, is that an improvement of human rights? Are arbitrarily depriving citizens of their liberties and putting citizens under house arrest and detaining them indications that human rights have improved? Was the illegal “detention” of Feng Zhenghu (冯正虎) for 160 days a new progress for human rights situation? Hong Lei, given all of this, are you able to represent the Chinese people? 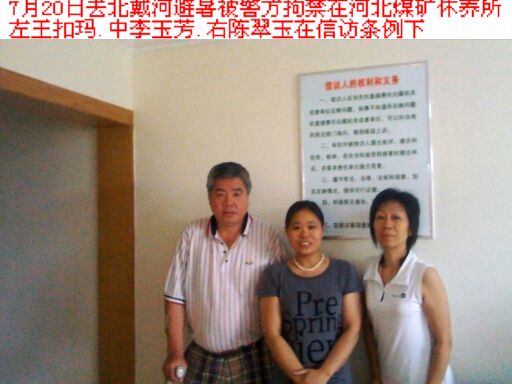 Wang Kouma, Li Yufang, and companion were held at the Hebei Coal Miners' Rest Home when they were detained in Beidaihe on July 20, 2012. 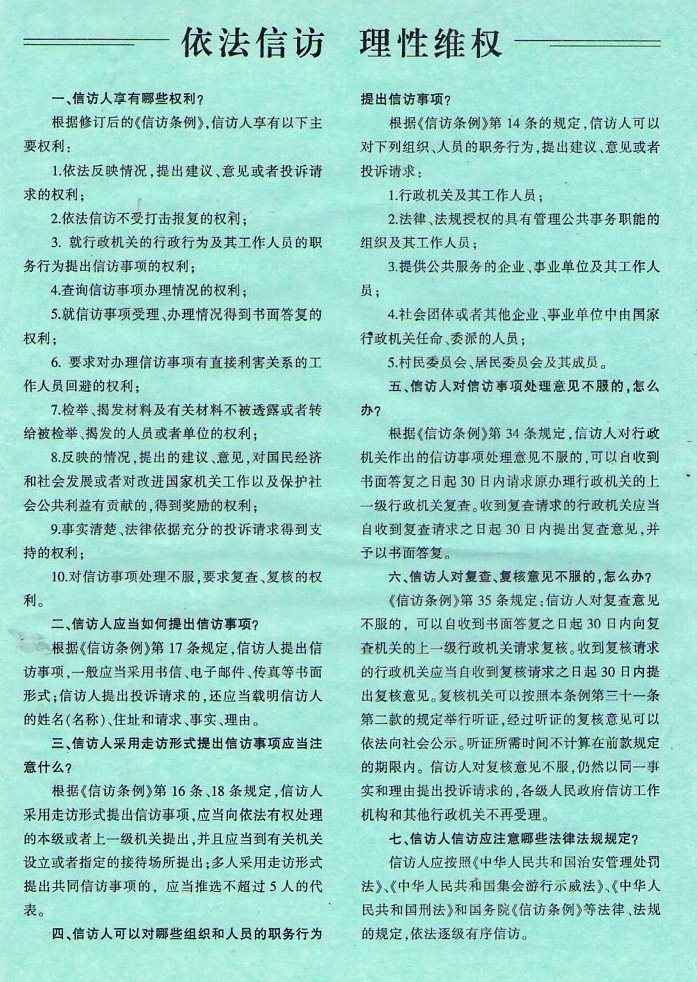